Live Blacksmithing Competitions in Cornwall and The Malverns 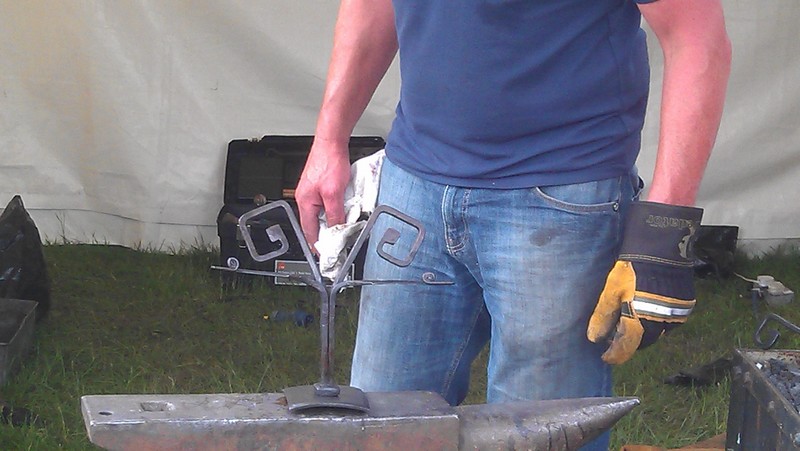 I competed in the Live blacksmithing competition at the Royal Cornwall Show and the Royal Three Counties show in June.

The Royal Cornwall show in early June got the best of the weather. I competed on the first day of the show and it was probably the hottest day of the year so far. Certainly very hot to be standing over a forge! The competition brief was to create a table centre piece and the time allowed was 2 hours. I created a candlectick to hold 2 candles and at the end of the show was judged the winner and show champion. With my win at North Somerset this now gives me 20 points in the National Live Blacksmith championship.

The Royal Three Counties show is held just benieth the beautful Malvern hills. The weather was not as good as for the Cornwall show, but for the most part the rain held off on the Sunday when I competed. For this live blacksmithing competition we were required to copy an item which is not revealed until you start. The competition piece this time was a book rest. This was a demanding task to create in the 2 hours allowed. Of the dozen or so blacksmiths who competed only 4 managed to complete in the 2 hours.  I was one of those 4 and was the last to compete. It was a close run thing between 3 of the pieces and I achieved second place.

This gives me 24 points in the National Live Blacksmith Championship and puts me in equal first place with 2 other excellent blacksmiths there is much friendly rivalry. The next 4 shows will determine a winner.