Welcome to ash ironworks, specialists in quality wrought iron work for your home and garden

ASH Ironworks is the inspiration of 5 times national champion and Master Blacksmith, Andrew S Hall FWCB and his work can be seen throughout the country at Dover Castle, Hampton Court Palace & Knightshayes Court amongst others.

Andrew Hall has been a blacksmith in Devon since 1986 starting at Branscombe Forge and developing a range of products for the home and garden and then expanding to Powderham Forge in addition. He then found he was spending too much time managing and not enough time on the forge so he has changed his business and now works alone again focusing on bespoke decorative pieces such as sculptures,  decorative gates and decorative staircases .

He has won numerous awards both national and international including FWCB from the Worshipful Company of Blacksmiths in 2012 and 5 times National Champion Blacksmith.

Andrew has done a lot of work around Devon including wrought iron gates at National Trust Properties Knighthayes Court and A La Ronde, both in Devon.

Andrew started his career by completing a 4 year Precision Engineer Apprenticeship at A.K. Wyles in Trowbridge whilst also attending Chippenham College. He successfully achieved an O.N.C. and H.N.C. qualification in Mechanical Engineering and stayed with the company for a further year. He went onto to put these newly learnt skills into practice by joining the family business where he spent two years working on the fabrication of gates and railings.

Andrew aspired to a more creative way of working with metal and began to explore the traditional craft of blacksmithing. During this time he also attended courses at Cannington College to greater develop his skills in Blacksmithing.

In 1984 Andrew was approached by The Guild of Wrought Ironwork Craftsmen of Wessex to produce a bouquet of handcrafted steel flowers to be laid across a horseshoe. This was presented to H.R.H. The Princess Royal by The Master of the Guild, Roland Hall (Andrew’s Father).

Andrew was presented with an Award for Proficiency in the Blacksmiths Craft in recognition of the quality of work in his presentation piece for H.R.H The Princess Royal.

In 1988 The Guild of Wrought Ironwork Craftsmen of Wessex selected Andrew to receive an Award of Proficiency for crafting a Patio table which was presented to HRH The Princess Royal who was very impressed with the table when she saw it on display.

Andrew continued to develop his skills and in 1986 left the family business to set up on his own, founding ASH Ironworks. He found the idyllic location of a traditional thatched forge nestled in picturesque village of Branscombe. Here he developed a range of traditional and contemporary products to sell from this working forge / showroom.

In 1990 the Prime Warden of the Worshipful Company of Blacksmiths presented Andrew with a Certificate of Merit for work of a high level in the The Blacksmiths Craft.

For the next few years all his energy was immersed into establishing himself in this traditional craft and developing his own unique style and range of products.

Then in 1992, looking for a new challenge, Andrew began competing in live Blacksmiths competitions. In just the second year of competing, he won the title of “International Live Blacksmith of the Year” and first prize at the 15th International Blacksmith Live Forging Championship in Warwickshire presented by the National Association of Farriers, Blacksmiths & Agricultural Engineers.

Unfortunately due to the pressures of work and the need to further develop products, Andrew did not have the opportunity to compete again until 2005. When, having taken on a new member of the team he was able to devote time to competitions and join the Worshipful Company of Blacksmiths at a number of county and craft shows.

In 2005 Andrew was presented with the title of: “Champion Live Blacksmith of the Year” by the Worshipful Company of Blacksmiths. This title is won by the blacksmith who earns the most points in “live competitions” at the county shows. Blacksmiths are given a limited time and an assortment of metal together with a brief description of what should be made.

An example of one of Andrew’s competition pieces is shown here, the brief was to make a decorative hook.

In 2008, for the fourth year he was presented with “Champion Live Blacksmith of the Year” by the Worshipful Company of Blacksmiths. Also during this year he was asked to be a probation judge at the Edenbridge and Oxted Show and in 2009 at the Devon County Show.

Late in 2009 Andrew was given the title of “Accredited Judge” and is now qualified to judge at county shows on his own.

In 2012 Andrew opened a new showroom and workshop at Powderham Forge to complement Branscombe Forge and in June 2012 Andrew was awarded the Bronze Medal by the Worshipfull Company of Blacksmiths in recognition of his work.

In 2013 Andrew competed in the National Live Championships again and for the 5th time was awarded Champion Live Blacksmith of the year.

Having won the Championship 5 times, Andrew decided to concentrate on his business and has not competed since.

In 2015 Andrew was made Master of the Guild of Wrought Ironwork Craftsmen of Wessex. This is an organisation close to Andrew’s heart as it helped him to get to where he is today and he wants to put back in some of what he got out.

I am the  artist blacksmith, Andrew Hall FWCB, with over 30 years of experience. I established ASH Ironworks in 1986 with Branscombe Forge and then Powderham Forge and am now working near Honiton.

Amid the roar of the forge fire and the ring of the anvil, I work using traditional forging tools and techniques to create your individual piece.

I focus on high quality decorative ironwork for your home or garden and always love a new challenge. I love to create sculptures and decorative items that also have a practical function.  With a background in precision engineering I am able to create everything from gates to staircases as well as sculptures.

If you require any assistance or have specific requirements for your order, or you would like to speak to me you are welcome to contact me by phone or email and I will be most happy to help as best I can. 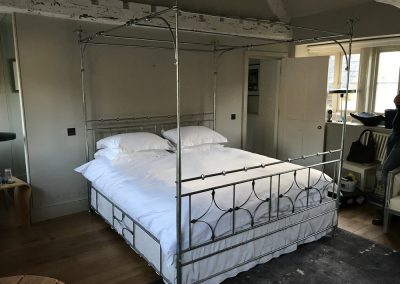 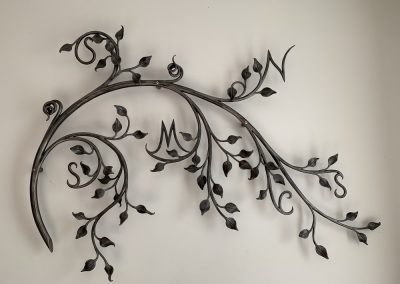 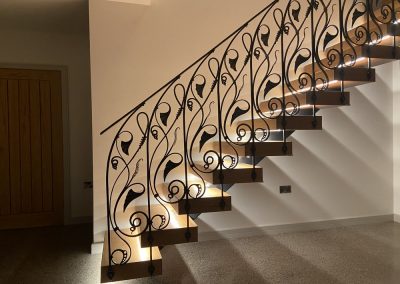 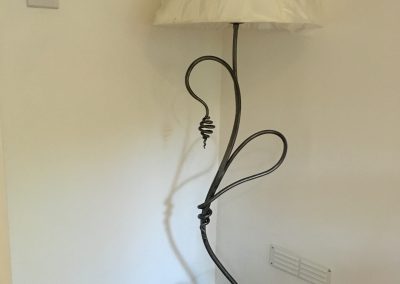 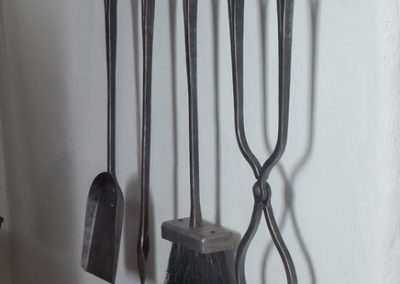